Black Hat SEO vs White Hat SEO: What is the Difference 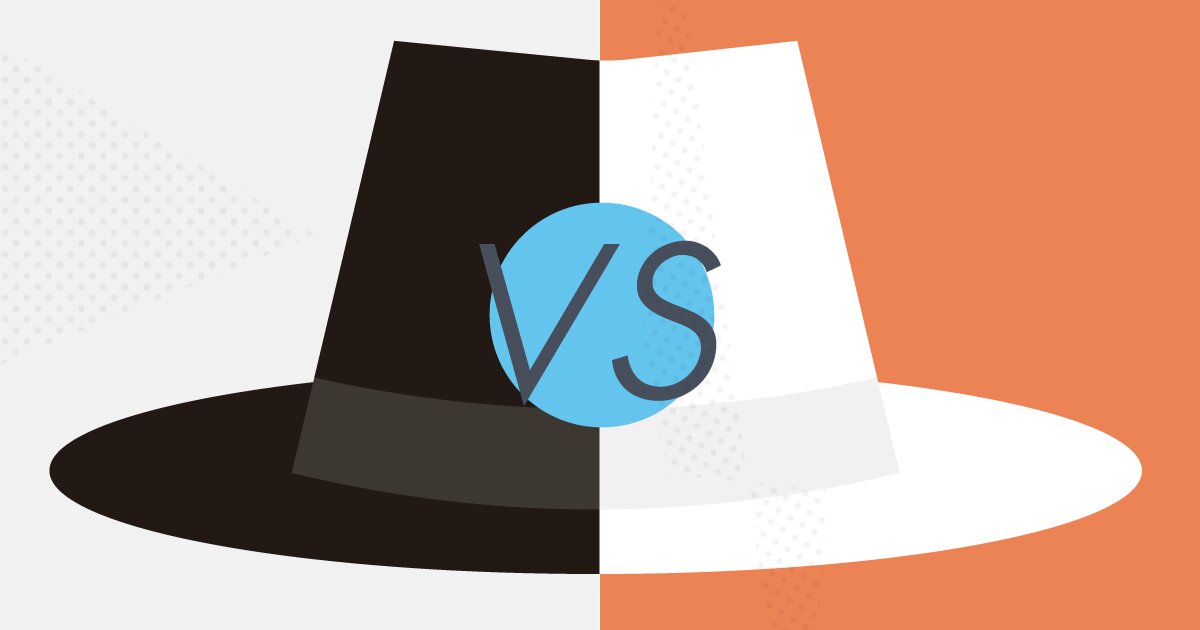 You’re probably familiar with ambiguous terms like Black Hat and White Hat SEO (and you might be wondering what this has to do with hats). Today we will analyze them and explain the differences between them.

This is your complete guide to White Hat vs Black Hat, where we cover all the techniques used for SEO (the good, the bad, and the ugly). Seriously, we try to unite them ALL.

What is Black Hat SEO?

Black Hat SEO refers to the “unethical” techniques used by marketers to increase their search rankings. These include, but are not limited to:

Link farming to have a complete network of web sites, intended solely for the purposes of link-building. They are similar to PBN and tend to have low-quality content, low incoming and similarly, low social signals.

Hide links – one of the oldest SEO hacks, which has been abandoned for a long time (thankfully). For example, you can hide a link by making the text white and placing it on a white background.

That way, your readers don’t see it, but the problem is … Google does! And once the page is indexed, you will be penalized for its SERP ranking.

Keyword stuffing – Simply repeat high-volume keywords, regardless of whether they fit the context. This practice was seriously affected during the Google Panda update and you should avoid using it.

Instead, focus on the reader, choose synonyms, and don’t repeat the same keyword every second sentence in your article.

Auto content: have software writing content for you (an example would be a plugin called WP AutoContent). First of all, this usually ends up being unreadable and irrelevant to your audience, as machines still have limited predictive power.

Second, this software often steals other people’s work bit by bit and combines these chunks to produce “new” content.

In fact, this violates the guidelines of various search engines and should be avoided as this type of content is really not aimed towards the user.

Cloaking – Another widely known black hat SEO tactic, where you would display two separate pages – one for website crawlers and one for users.

This is quite advanced as you would have to manipulate Google’s trackers by identifying your IP and displaying a different version of the web page.

However, Google is getting smarter every year and today they can detect cloaking techniques with relative ease.

Using an excessive amount of links in your footer

You’ve probably guessed by now, this doesn’t work anymore either, thanks to Google Panda. You can, of course, include helpful links, but not many, as this will be considered “bad website structure”, lowering your ranking.

As you know, HTML is a big part of technical SEO and is responsible for proper website structure and perfect user experience. Over-optimization means inserting tons of <H1>, <H2> stuffing as many keywords as possible in a tag.

Google crawlers can detect these problems very easily, which is why they no longer work.

nother commonly used technique in the past. What you would do is set up a nice page first and make sure Google ranks it well for your target keywords.

And then de-index that page or the entire site. In theory, Google should still “remember” the previous version of the page that people would see.

Some people are still trying to implement this trick, but not only has Google gotten better at detecting it (since the penguin update), it’s also one of the few examples on this list, which is not only unethical but illegal as well. D

Doing this type of manipulation on a large scale can result in a lawsuit!

pretty straightforward, you find blogs / social media and just copy and paste the same irrelevant message, which contains a link pointing to your site.

As you know, spam is not dead and it is almost everywhere, but it just isn’t effective for SEO. In fact, it hurts your SEO.

While it may mislead people, posting links (along with the same comment) in irrelevant contexts will never increase your ranking in Google search.

Surprisingly, it still works and is widely used by many! Not as simple as before. The purpose of clickbait is to write a title (such as making false promises or offering free stuff) that will make the user click on it.

However, when the user accesses a web page, he later discovers that the title was based on a misleading statement.

Google does a relatively good job of penalizing clickbait pages, but the method is still fairly common among social media scammers.

Running software (or a bot) that would send automated Google searches to artificially increase the popularity of a particular keyword / keyphrase.

Google has been fighting this practice for years, and with the new reCAPTCHA V3 automating a bot for this purpose has become nearly impossible for most users.

This probably deserves an article of its own, but we already cover this topic. This term refers to an attempt to artificially harm your competitor (spamming the website link, falsifying negative comments, initiating click fraud, etc.).

These methods are called “Black Hat”, because they certainly violate Google Webmaster Guidelines, as these methods try to “manipulate the system” rather than involve the actual human audience.

While executing any of these tricks is likely to affect your SERP ranking ting in the short term, it is very risky.

What is White Hat SEO?

This sounds very simple, but it is often overlooked. Don’t use any automated software to write content for yourself, just do a little research and find some gaps in the existing content and see where you can make a contribution.

It’s totally normal to write about the same topics (in fact, most web content is repetitive), but find a way to differentiate yours: explain the topic in-depth, ask questions that previous authors left out, etc. )

Links to your website naturally. Usually this means having a pillar page that discusses a particular topic in depth, and then you can include anchor text that would take you to other specific pages on your site.

Not only does it benefit users hungry for knowledge, but it also helps Google understand what your content is about. Not only that but referencing yourself in a meaningful way (or internal linking) is just good SEO practice in general.

Become a trustworthy and reliable source in your niche, that people would vouch for. In other words, other people will refer to you and link it to your site without asking. Examples of such influences in the SEO world are Brian Dean and Neil Patel.

You shouldn’t try to fool Google, remember, you write content for your audience. Optimize your web pages for the keywords relevant to your business and don’t complete them all at once.

Repeat when necessary, but try to find synonyms for our target keywords; This will make your text more readable and will also benefit your SEO as you are now targeting various related keywords.

Make sure you have a solid mobile version and take the time to design a perfect UX (user experience) for mobile users as it would be very different compared to desktops.

Make your site accessible to people with disabilities. This includes, but is not limited to: having an intuitive page structure, including alternative text, that provides the description of the link.

In short, White Hat’s SEO tactics are aimed at a human audience, which is appreciated by Google. The only possible downside to rejecting the “natural and organic” way to build your reputation online is that…. It is painfully slow.

There are probably hundreds of players within your niche already that have been there for a while. What this means is that they probably have dozens of backlinks, a lot of content on the site and competing with them becomes difficult. Needless to say, it’s not impossible, it just takes a while.

Is There an Option in the Middle?

Yes it exists! People tend to call it “gray hat SEO”. As suggested, Gray Hat SEO is in the middle between the two and offers both advantages.

White Hat, Black Hat and Grey Hat Side by Side

We are not your mom to tell you what to do 🙂 It is up to you to decide if you want to make a quick return, but risk a lot with Black Hat Seo techniques.

Also, you can play well, but the game will take much longer. The gray hat looks good in terms of speed and profit, but let’s not lie, it’s expensive

In the end, you should try all of these methods and find out what works for you. Try to build organically, but if you want to fool Google, do it the smart way and Black Hat isn’t always smart.

How to Write Headlines That Grab Attention: A 9-Step Formula for Trustworthy Blog Titles 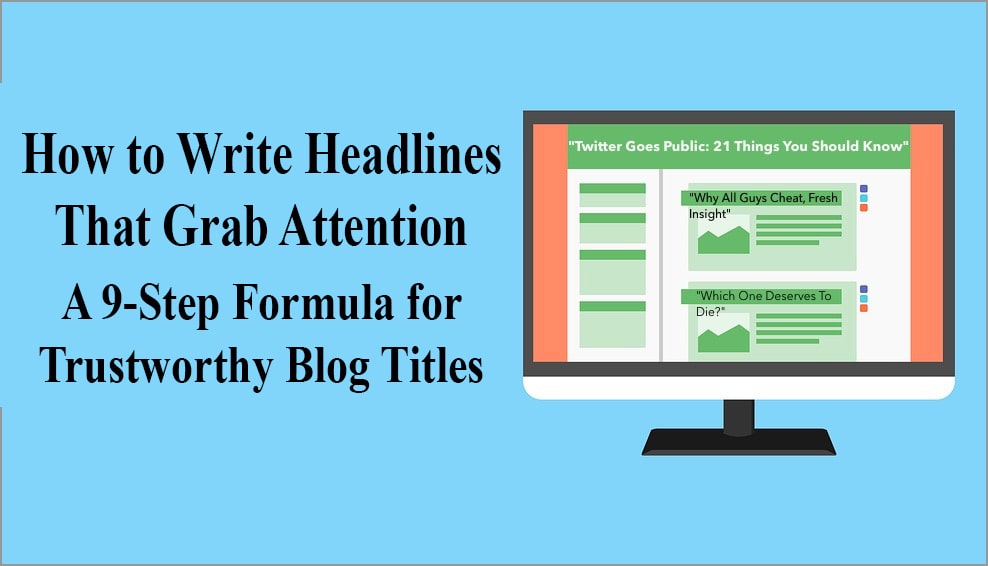 How To Write a Successful Headline, Based on Articles With 15K+ Views 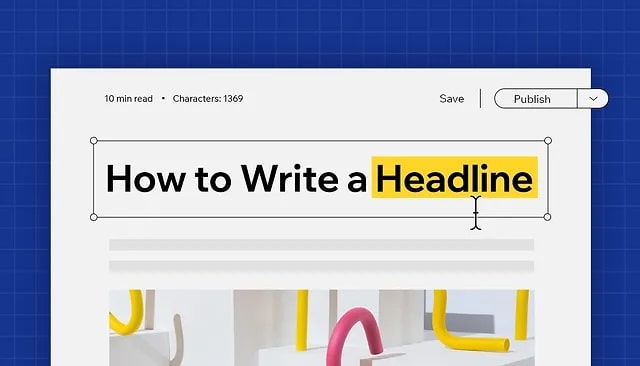 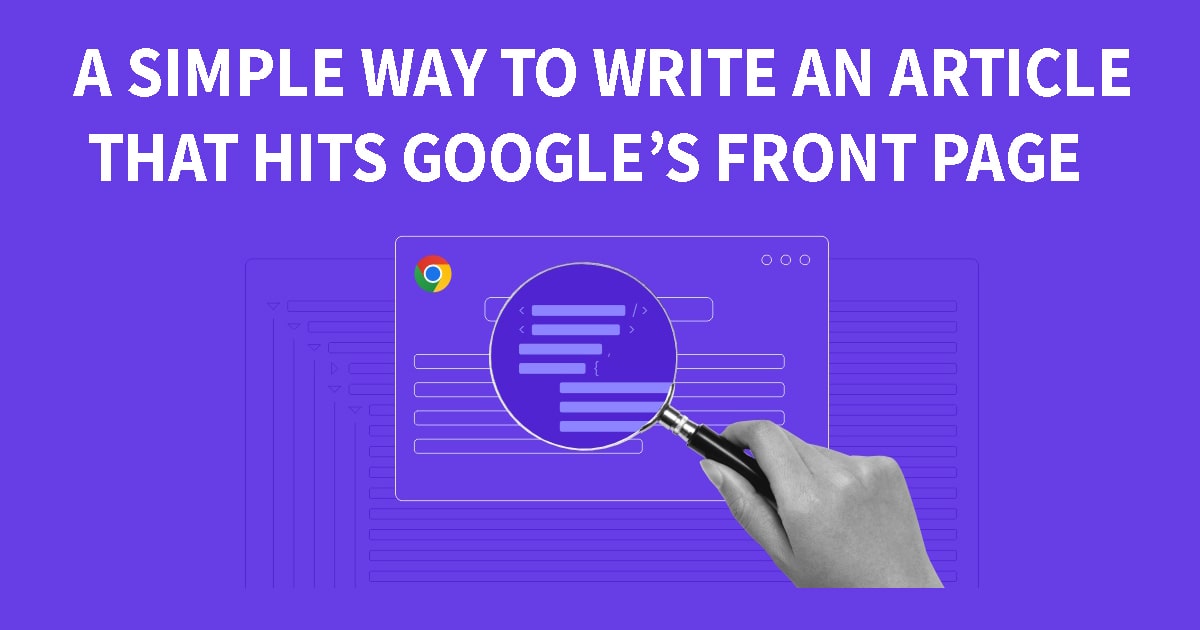